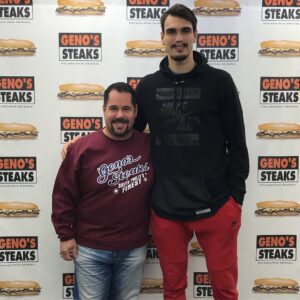 The Philadelphia 76ers are the hottest team in basketball right now, winning their last 16 regular season games in rows and needing only five games to defeat the Miami Heat in the first round of the playoffs. As the No. 3 seed in the Eastern Conference, the Sixers now await the winner of the series between the Boston Celtics and the Milwaukee Bucks.

After years of “tanking” and “trusting the process,” which yielded some downright-unwatchable seasons, the Sixers are back as one of the NBA’s most exciting teams.

Center Joel Embiid has taken over games since returning in Game 3 against Miami after recovering from surgery on a broken bone in his face. The 7-foot Cameroon native led the Sixers during the regular season with 22.9 points, 11.0 rebounds, and 1.8 blocks per game, and has been a force to be reckoned with since returning to the lineup, averaging 18.7 points, 10.3 rebounds, and 3.0 blocks per game.

Philadelphia’s other X-factor is its 6-foot-10 point-forward Ben Simmons, who has been virtually a triple-double machine as a rookie—15.9 points, 8.2 assists, and 8.2 rebounds per game—and is the favorite to win the league’s Rookie of the Year Award. That production has carried over into the playoffs with Simmons averaging 18.2 points, 9.0 assists, and 10.6 rebounds in the first round.

With a solid supporting cast of sharpshooters that includes Dario Saric, J.J. Reddick and Robert Covington, as well as one of the deepest benches in the Eastern Conference, hopes are high in Philly right now for the Sixers. And what better way to celebrate the accomplishments of Philadelphia’s hottest team than by eating the best cheesesteak in Philly as you’re watching their playoff games?

If you want to experience the combination of great playoff sports and a signature piece of Philly cuisine, head over to Geno’s Steaks at 1219 South 9th Street, Philadelphia, PA. We’re located at the intersection of 9th and Passyunk and are open 24/7!

No need to search for the best Philly cheesesteak near you when you’re leaving the Sports Complex after the game or when you’re on your way down to the Wells Fargo Center. It’s waiting for your right here at Geno’s Steaks.

Geno’s Steaks has cheesesteaks, hoagies, roast pork sandwiches, fries, and more! Stop on by today and order yourself a “whiz with” or an “American without”—however you prefer your favorite Philadelphia meal.

Whether it’s before the game, during the game, or after the game, there’s never a bad time for Geno’s Steaks. Coupled with Sixers playoff basketball, it’s about as good as it gets!