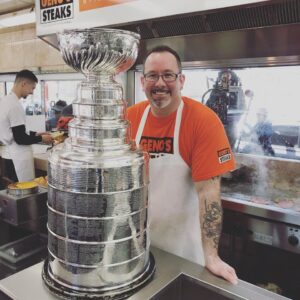 Lord Stanley’s Cup was recently in Philly to visit Geno’s Steaks, and the joint with the best Philly cheesesteak is hoping it’s back again soon, but this time in the Flyers’ possession.

As the No. 2 and No. 3 ranked teams, respectively, in the Metro Division, the Pittsburgh Penguins and Philadelphia Flyers are set to square off in the first round of the NHL Playoffs, which begin April 11.

The Penguins dominated the season series against the Flyers, winning all four meetings between the two Pennsylvania-based squads. But the Broad Street Bullies will be entering the playoffs with some momentum and revenge on their minds.

Claude Giroux & Co. have won four of their last five games and have always proven to be a tough out for Sidney Crosby and his two-time defending Stanley Cup champion Penguins. In fact, although Pittsburgh has enjoyed more recent playoff success than Philadelphia has, the Flyers won the series the last time these two teams met in the playoffs. Giroux himself has been on fire down the stretch, compiling 19 points (8 goals, 11 assists) in Philadelphia’s last 11 games.

There is sure to be no love lost between these two in-state rivals during their upcoming playoff series, and such a thrilling matchup requires some hearty meals for before, during, and after Flyers games.

What better way to watch the Flyers take the ice against the Penguins than by eating the best Philly cheesesteak as you’re taking in their playoff games?

If you want to experience this unique, but perfect, combination of hockey playoffs and a piece of Philly culinary culture, head over to Geno’s Steaks at 1219 South 9th Street, Philadelphia, PA. We’re located at the intersection of 9th and Passyunk and are open 24/7!

No need to search for the best Philly cheesesteak near you when you’re leaving the Wells Fargo Center or when you’re heading down to the game. It’s waiting for your right here at Geno’s Steaks.

Geno’s Steaks has a full menu that includes cheesesteaks, hoagies, roast pork sandwiches, fries, and more! Stop on by today and order yourself a “whiz with” or a “provolone without”—however you prefer your Philly cheesesteak.

With Philadelphia pride flowing from Flyers fans all over the city, there’s never been a better time to enjoy the best Philly cheesesteak at Geno’s Steaks.