Just a presidential hopeful in September 2016, Donald Trump made his way down to South Philly during his run for the White House and – like millions of patrons before him – got a cheesesteak from the world-famous Geno’s.

Stephanie, a Milford, Pennsylvania native and Geno’s employee of now two years, was working that day when the current president came to 9th and Passyunk. As she tells it, a passerby thought he could sneak in close to Trump and snap a photo with his cell phone. That man could not have been subdued by U.S. Secret Service agents faster, she laughs, pointing out that they pounced on him and had his arms behind his back in the blink of an eye. It’s not like a president comes to your place of work on a regular basis, but it’s always fun when the spotlights shine a little brighter on the intersection that’s always bustling thanks to Geno’s 24/7 hours of operation. 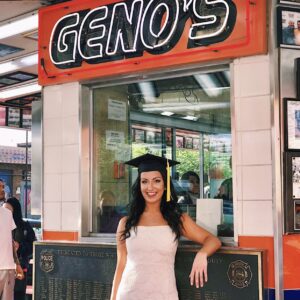 During her two years (and change) at Geno’s, Stephanie has come to love the hectic atmosphere. As a native of Pennsylvania’s Poconos region, family and friends are hours away. Now that she has recently relocated to South Philadelphia, she’s even closer to co-workers whom she views as a “tight-knit group” who work in a “family-like atmosphere.”

While she says the time that David Schwimmer – of “Friends” television show fame – swung by the steak shop, she just can’t get over Trump’s visit because of the pure chaos of it all. What’s more, that’s the environment she and co-workers at Geno’s thrive in. From the minute she walks in the door, the action starts. Stephanie has been tasked with plenty of prep work, setting things up for fellow workers, cleaning (which is a huge part of daily efforts) and working the window to take orders from customers. She’s also worked her way up to handling toppings for outbound sandwiches, which is a task any employee can eventually be tasked with so long as they demonstrate the desire to do more. For these reasons and more, it’s easy to see why we’ve picked Stephanie to be the focus of this employee spotlight.