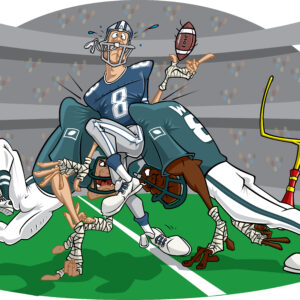 These days, you can get more than just a delicious Philly Cheesesteak in Philadelphia. Now you can also feel what it’s like to be a Super Bowl champion, something that could never be said in the City of Brotherly Love prior to the last NFL season.

The Philadelphia Eagles finished the 2017 season as pro football’s best team. With a 13-3 regular season record, No. 1 seed in the NFC playoffs, and a 41-33 victory over the New England Patriots in the big game, the Eagles reigned supreme thanks to the savvy coaching of Doug Pederson and near-flawless combined quarterbacking from Carson Wentz and Super Bowl MVP Nick Foles.

Still riding high off of the Eagles first Super Bowl victory, Philly couldn’t be more excited for the upcoming NFL season and a chance to defend its title. But with this excitement comes high expectations for a team that is returning the majority of its championship roster.

It won’t be an easy road for the Eagles during the 2018 season. Besides what is expected to be an improved NFC East, Philadelphia will also have to play each team in a very tough NFC South division, as well as last year’s division winners from the NFC North and NFC West—the Minnesota Vikings and the Los Angeles Rams.

With the team’s Organized Team Activities (OTA) and mandatory minicamp already wrapped up and training just around the corner, now’s a great time to preview the outlook for the Eagles’ upcoming season. Let’s take a look at what we can expect from the Eagles come fall.

Philadelphia also boasts a few rookies that could have an immediate impact in 2018 such as tight end Dallas Goedert (second round), cornerback Avonte Maddox (fourth round), and defensive end Josh Sweat (fourth round).

The reigning Super Bowl champs will raise their championship banner and open up the season at home Sept. 6 against the Atlanta Falcons, which they beat last year in the NFC divisional round. Other notable games on Philadelphia’s 2018 schedule against teams that made the playoffs last year include Oct. 7 against the Vikings, Oct. 21 against the Carolina Panthers, Oct. 28 at the Jacksonville Jaguars (in London), Nov. 18 at the New Orleans Saints, and Dec. 16 at the Rams.

It’s not going to be an easy road for the Eagles, who would benefit greatly from repeating its 5-1 record against the NFC East last year. But Las Vegas odds makers still have Philadelphia’s 2018 regular season win total projected at 10.5 and put the Eagles at 8/1 to win the Super Bowl again—the second-best preseason odds of any team in the league.

It remains to be seen whether or not Wentz or Foles will start the season under center for the Birds, which mostly has to do with the health of Wentz as he rehabs from knee surgery. But the Eagles and those who follow them certainly seem confident in their chances to compete either way.

It’s extremely hard to repeat as Super Bowl champs. In fact, it has only been done eight times before and twice in the last 20 years. But with a handful of key players that didn’t get to finish last season on the field returning for Philadelphia such as Jason Peters, Darren Sproles, Jordan Hicks, Chris Maragos, and Wentz, this could be a defending Super Bowl championship team that is hungrier than most.